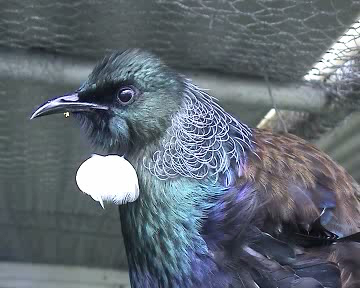 Woof Woof was our semi-tame Tui, he would sing and if you were patient he would talk back to you too.  He would often startle visitors with his very deep male voice — an exact match for centre manager Robert Webb.

Sadly, Woof Woof passed away peacefully on 5th February 2011.  He was 16 years old, as far as we know that is the oldest known Tui on record.

The voice of Woof Woof lives on with Tuis called Jett and Little Tui.  These tui lived on either side of Woof Woof’s cage and they have picked up many of his phrases.