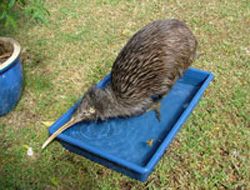 “Snoopy” our one legged North Island Brown kiwi died on Wednesday 20 June 2007. Snoopy was 15 years old and had lived with Robert and Robyn Webb at their home since he was only 3 months old.

Snoopys death was a real shock for Robert and Robyn as Snoopy was like a member of their family. Snoopy would call out to them when they arrived home at night and wait to be let out on the grass to probe for worms and grubs. The Webb’s have not had a holiday in years as they couldn’t just leave Snoopy with anyone.

The role in education that Snoopy played has been a total success. For most adults and children it’s the first time they have seen and touched a live Kiwi. We still get many calls from Schools away from Whangarei, and without the help of Eagle Air we would not be able to reach a number of these Schools.

Robert and Robyn are extremely proud of the work Snoopy did and the role he played in educating people about the preservation of kiwi. Snoopy had a marvellous personality that meant he was never phased by the noise of a classroom full of excited children. He would still hop around on the grass probing for worms. He has been a great icon and provided a lot of pleasure for many people.

On the 10 August 2007, Snoopy posthumously received a Conservation Award from the Department of Conservation.