Morepork Chicks Too Hot in the Nest 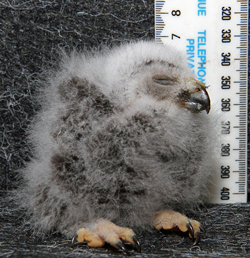 The 2010 / 2011 chick season has seen quite a number of Morepork chicks come into the Centre.  Robert Webb, Centre Manager, says that the very hot summer conditions are the cause of the problem.

Morepork will have between 1 and 4 chicks in a clutch at a time.  During very hot weather the parent bird tries to keep the chicks cool by fanning its wings.  If that does not do the trick the parent bird will often choose the smallest chick (known as the runt) and push it out of the nest.  Sometimes even the two smallest chicks are pushed out.

While this is a very harsh way of dealing with the heat problem, it is a case of survival of the fittest.  The parent bird chooses the fittest ones to stay in the nest.  The chick that is pushed out ends up on the ground; it can’t fly yet, is not fed by the parent bird and is vulnerable to predator attack.  These are the birds that are picked up by members of the public and brought into the Centre.

Once at the Centre the chicks are fed by hand and their accommodation really is 5 star.  Initially the chicks are covered in fine grey down, as their feathers grow small bits of the down remain on the tips of the feathers.  This gives them a super cute often comical look about them.  As time goes on, the down slowly gets preened off or warn off the birds feathers.

The photos show “Rua” as a very young chick that came into the Centre on 1stDec 2011, he was only 67gms and nearly 7cm tall, probably about 7 days old.  Adult birds are around 29cm and 175gms.

“Rua” got to ride home with Robert and Robyn and back to the Centre each day.  Being so small he needed feeding last thing at night and first thing in the morning.  He even got his own hot water bottle during the night to keep him warm.

Once Rua was starting to fly and feeding himself he was transferred to an outside aviary.  This process means that the bird can practice flying to get fitness levels up as well as practicing hunting skills.  This part of the rearing process also breaks constant human contact with the bird and instinct takes over.  It generally does not take too long for the birds to not want to have anything to do with us once they have been in the outside aviaries for a little while.  The pictures above show Rua and Sophie together in the aviary.

Rua will be released once all his down has gone and his flying and hunting skills are up to scratch.