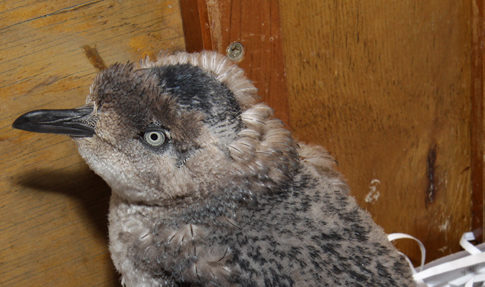 These 2 Little Blue Penguins were rescued from Wellingtons bay out at the Whangarei Heads. They were found wedged between rocks below the high tide line.  The birds had been chased by a group of Black Backed Gulls and had fallen into the crack between some rocks while trying to get away from the gulls.

A member of the public saw the gulls and went to investigate.  The penguins were very lucky as they were rescued and brought into the Centre.

If that lady had not stopped to see what was going on those little guys would have either drowned at the next high tide or been taken by the gulls.

The reason why the birds were up out of the water is a complete body moult which happens once a year.  The birds usually return to their breeding site during this time.  The moulting period is between December and March and usually lasts for 10 – 18 days.  The birds must get themselves into top condition before they start their moult.  They have to stay on land and can not go into the water to feed.  They are not water proof again until their moult is complete.  We have found that this makes for a very grumpy little bird!  Perhaps it gets itchy with all those tiny feathers falling out as the new ones come through.

If the penguin is moulting and not injured, all we have to do is provide a safe environment and water.  The bird does the rest and once all their new feathers are through we take them back to the beach and release them.

They get so excited when they catch their first smell of salt water.  As you can see from this photo the bird bolted from the carry cage and started swimming in very shallow water.  He swam out about 30m and just floated around for a while.  He certainly was very pleased to be back home.

These penguins were at different stages of their moult, the first one went back to sea 5 days after coming into the Centre.  The second bird was released after 10 days at the Centre.