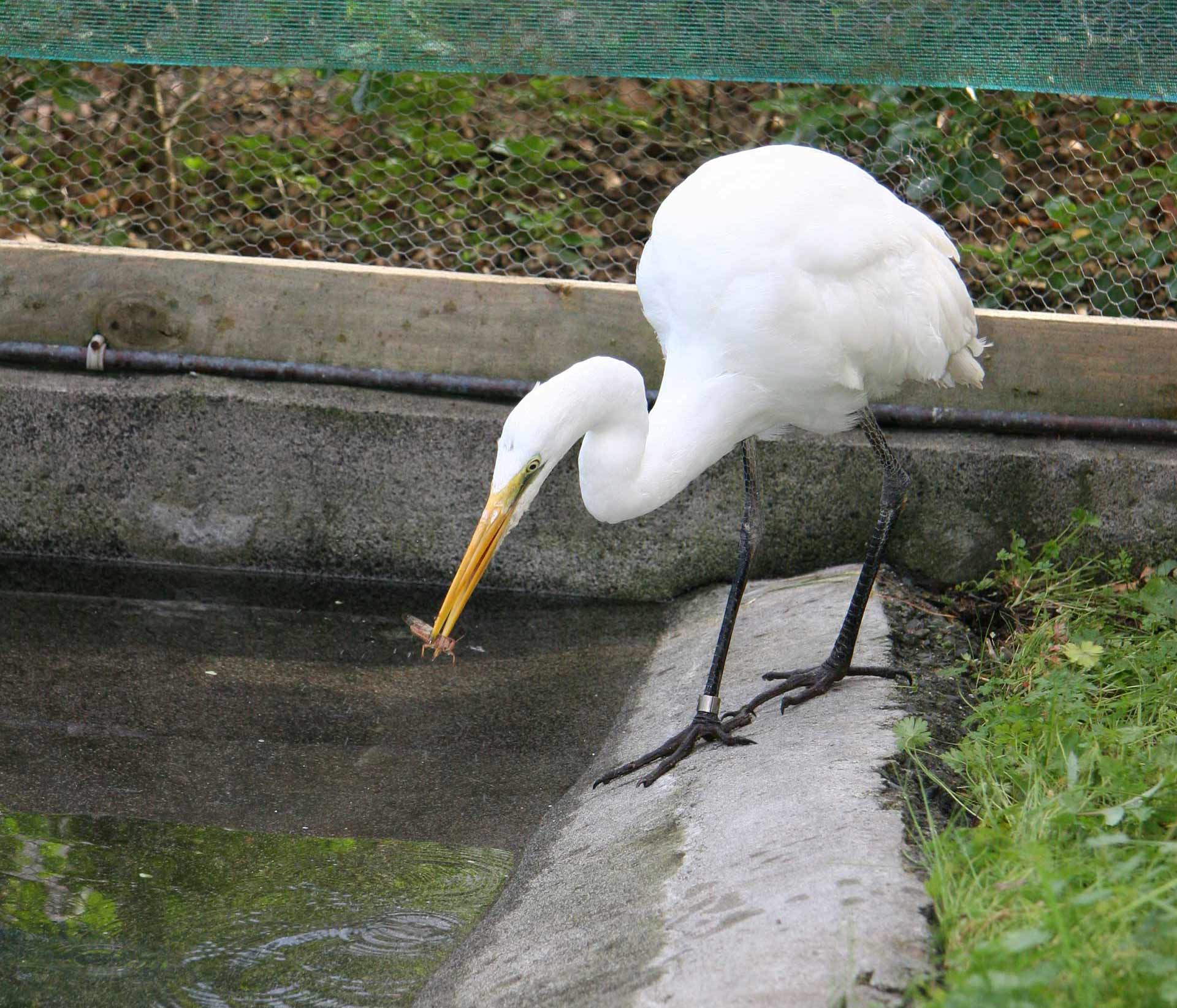 The white heron had flown into the back yard of a family in the Ruakaka area where he ate all the fish in the goldfish pond.  The family let him as they were so amazed at having such a beautiful visitor.  They could also see that the bird had an injured left foot and was not weight bearing on that leg.

The Family fed the bird daily for at least 2 weeks.  Once it was standing and walking ok they stopped feeding it and the bird flew away.  However, the Heron returned 3 days later and the foot was obviously sore again.  The Heron was then brought into the Recovery Centre as family were going overseas.

On arrival at the Centre (2 March 2007), we observed that the left foot was very swollen and the skin was starting to split and peel from the foot.  It looked like the middle toe had been broken and was still sore but healing.  The bird was also very skinny.  The Heron was treated and fed on a diet of ox heart, fresh fish and tua tuas.  The bird remained at the Centre until there appeared to be no further problems using his foot.  The bird was then transferred to a 7 acre wet land area out at Paru Bay on 08 March 2007.

The Heron stayed at the wetland area for 2 days before we had sightings from the public, these indicated that the bird was moving across the harbour and heading back to the Ruakaka area.

From that day on we had daily calls reporting a large white bird either “playing chicken with vehicles on SH 1”, as it flew low across the road to get into the side ditches.  Or that a white bird was following people around as they walked on their property.

The public that called were all concerned for the birds’ safety, weather from dogs, people or vehicles.  The problem of the bird seeking out humans was a big one.

Finally, a horticulturalist was able to catch the bird after it had been curious enough to follow him through a 40 metre polly-house.  He phoned us to see what he should do, we asked if he had any mince that he could use to entice the bird into a shed and then catch him.  This is exactly what he did.  The bird came back to the Centre on 17 April 2007 after only 39 days in the wild.

DOC staff consulted scientists and decided that they would try and release the bird on a reserve further north, but for several reasons, this did not happen.  DOC banded the Heron on the right leg, band number M22487.  The bird was again released at the wetlands area at Parua Bay on 18 May 2007.

The Heron stayed around the wetland area this time, but would fly out daily to visit people from around the Parua Bay area.  Where ever anyone was doing something that took its interest the bird would visit; this caused a number of problems;

The bird would walk into people’s houses, he was found on a kitchen table and on a bed.

The Heron had started to take great interest in poultry chickens and was seen “having a go” at them.  Both these situations caused people to get very angry with the bird.  The heron would have been harmed in some way, if not killed as a result of being over humanised.

Some of the public could not understand that it was natural for the bird to hunt other smaller birds – waxeyes in particular.

A lady out gardening dropped her glove and quick as a flash the Heron darted in and picked it up thinking it was food.  It was only a matter of time before the bird would try to take food from a child and could have pecked them in the face.  The bird arrived back at the Centre on 29 May 2007.

Together with DOC and Auckland Zoo we worked through the best option for the Heron.  Given that the bird showed repeatedly that he was very humanised it was decided that the best option was to get him to the Auckland Zoo.  The bird was transferred to the zoo on 15 June 2007.  Zoo staff were very happy to have the heron, the wet land area at the zoo was undergoing re-development so a suitable white heron was an unexpected wonderful addition.

Moral of the story;

If you find a wild bird in trouble get in touch with the organisations that care for wildlife.  They will know the best way to help the bird so that it has the best chance for release back into the wild.  Some birds are more easily humanised than others, herons in particular.

In this instance the White Heron is now likely to have to be in captivity for the rest of its life, for its own safety.  This is very sad especially when physically there is no reason to be in captivity, it can fly and knows how to hunt but its too easy now for it to go to humans as it has no fear of them.