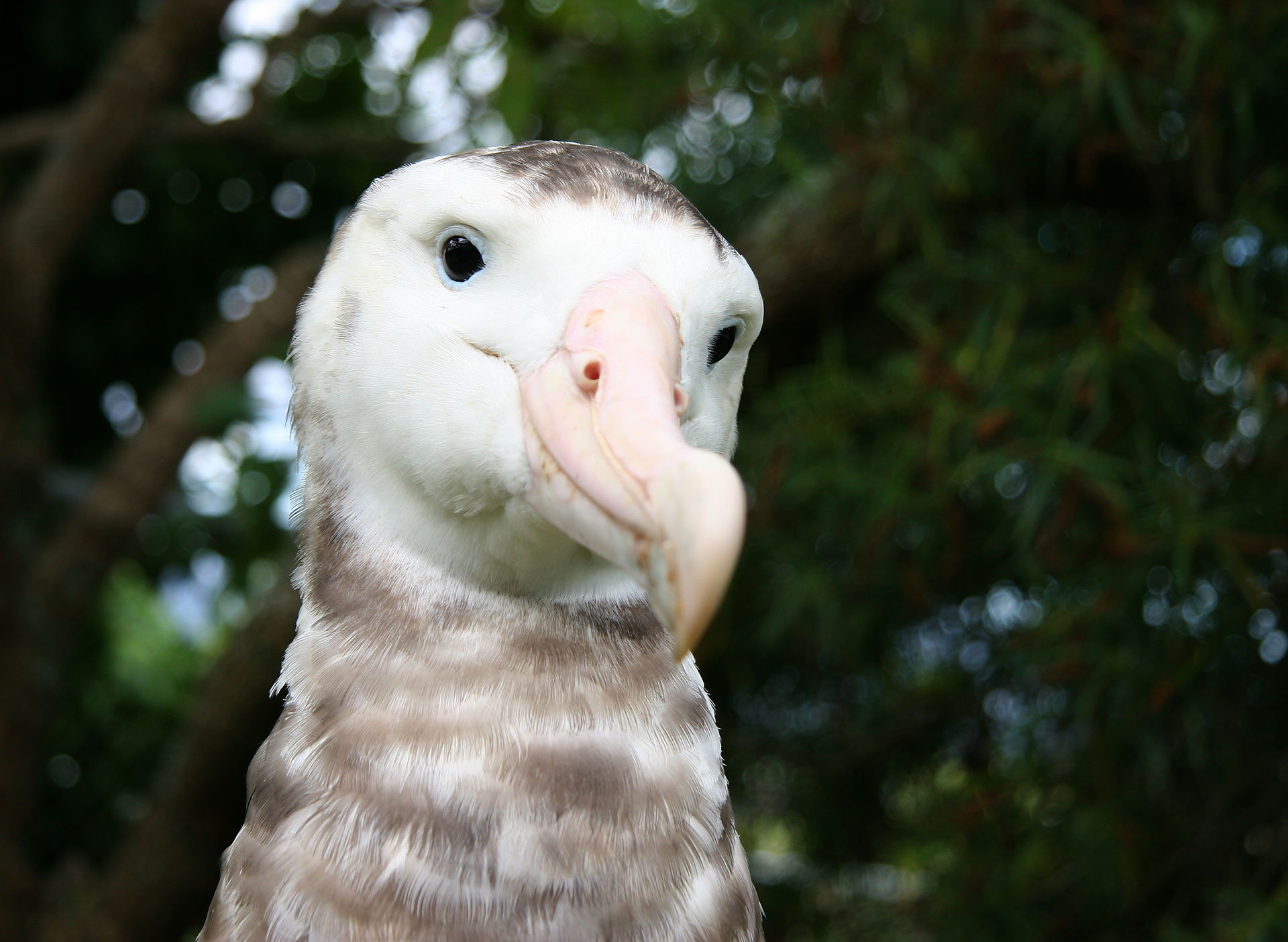 This bird was found on Ninety Mile Beach by surfcasters on Friday 23 April 2007.  The albatross was transferred to a small bird centre in the Far North.  The bird was very skinny and they could not get him to eat so they sent him to us at the Whangarei Native Bird Recovery Centre on Monday 26 April 2007.  It appeared that the bird had been caught in the recent storm, battling gale force winds from the east and he was absolutely worn out, unable to stand or hold his head up.

We also needed to identify what kind of albatross we had, a Royal or Wandering?  When these birds are juveniles it is quite difficult to distinguish between them.  The sign we looked for was a very distinct dark line running along the cutting edge of the top mandible (beak).  As the bird began to drink, what we thought was a dark line ended up being mud and the bird was identified as a Wandering Albatross.  We also consulted with the Ranger at the Royal Albatross breeding colony at Taiaroa Head, (close to Dunedin, New Zealand).  This gave us vital assistance regarding target weight and feeding.

Our initial review of the bird indicated dehydration and malnutrition; we needed to get him re-hydrated and feeding as soon as possible for him to have the best chance of recovery.  The bird was only 3.609kgs when it arrived at the Centre, it should have been at least 5kgs.  Our treatment consisted of electrolyte re-hydration and a small amount of food, building up the amount each day.  The bird would need an ongoing volume of 10% of its body weight of food per day as well as good volumes of hydration.  As soon as the public were aware that we had an Albatross eating us out of house and home we had fishermen bringing us fresh fish.  Between those gifts and what we provided, our large visitor put on weight very quickly.

We did have a few nervous moments with the albatross, we called him “Tricks” as there was one day were we thought we were going to lose him.  But he rallied and put on weight so that he was just over 5 kgs when he was released.

The albatross was at the Centre for a total of 17 days.  We would have liked to have liked his weight to have been closer to 6kgs before release, however once he started walking up the footpath to find high ground and spreading his wings while standing into the wind, we knew that he was telling us he wanted to go.   We had to ensure that the wings and wing feathers were not damaged as the bird practiced flapping his wings, exercising in preparation for flight after release.

The bird was released by Dr Ingrid Visser (Orca research scientist) about 20 miles outside the Poor Knight Islands on the east coast of Northland, New Zealand.  There were a number of other members of the albatross family sighted during the release.