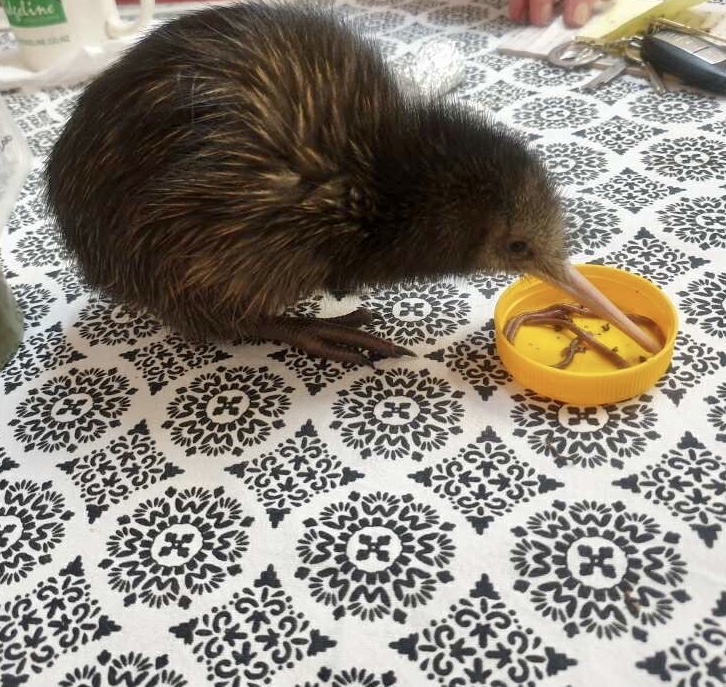 A newborn kiwi chick found dehydrated and disorientated in a Riponui farmer’s paddock is recovering well and putting on weight under the care of the team at the Whangarei Native Bird Recovery Centre.

Named Bruce by the farming couple that found him, the chick was losing weight rapidly when brought into the Bird Centre.

Bird Centre manager Robert Webb says it’s concerning that dry conditions are already having an impact on kiwi before summer has started.

“If it can’t find water in the bush, a kiwi will walk into a paddock at night and rub its beak from left to right across the dew on the grass. It will then lift its head and drink the water stuck to its beak.

“Sometimes they don’t make it home in time when the sun comes up, so they curl up into a ball in the middle of the paddock.

“Bruce is very lucky the famer was being observant and found him – he would have died otherwise.”

Robert believes Bruce was about seven-days-old when he was brought in as he still had a dry patch on his body where his umbilical cord was attached.

“Most kiwi weigh around 300g when they hatch. Bruce got down to about 228g, but is starting to gain weight now – he put on 40g in one night after a feed of worms.”

Robert says once Bruce gets up to around 400g he will be released back to the Riponui farm where he was found.

“A lot of kiwi conservation work has been done in the area, particularly predator control with the use of 1080 and poison bait stations. Six or seven years ago, Bruce would have been killed by a stoat before he could make it to a paddock.”

If you find a kiwi during the day contact the Department of Conservation or the team at the Whangarei Native Bird Recovery Centre the sooner the better.